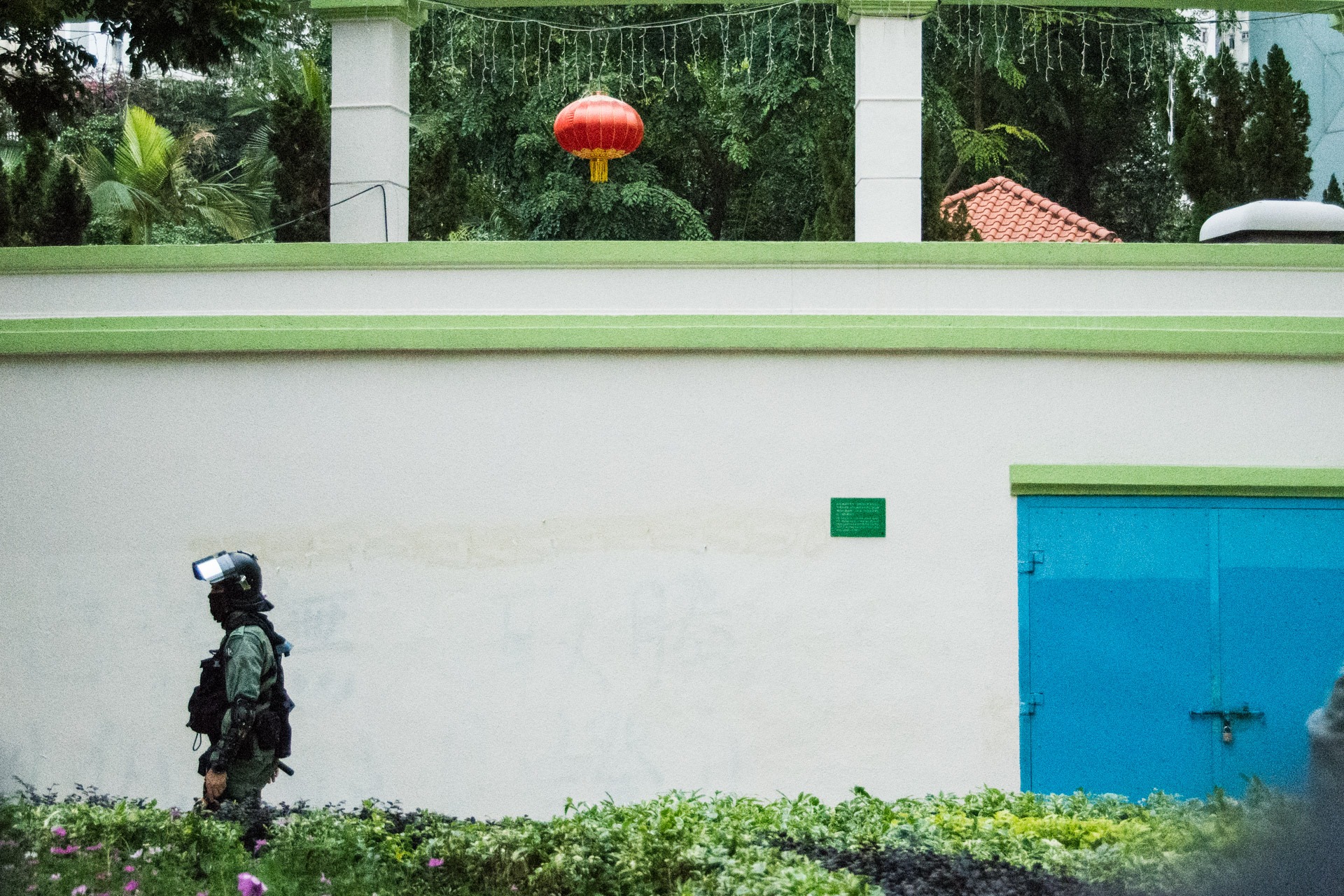 IZ3W:  A critique of colonialism is not an uncommon argument in Chinese official commentaries on politics in Hong Kong. 戀殖 (colonial nostalgia), 殖民遺毒 (colonial holdovers) or 去中國化 (desinicization) were often perceived as the roots of the evil of social unrest in Hong Kong and 去殖民化 (decolonization) as the panacea. How different is this 去殖民化 from “decolonization,” in Lausan’s understanding of the term?

Lausan Collective: Despite the CCP’s weaponization of “anti-colonial” critique, we believe that Hong Kong has never fully been decolonized, and that the CCP itself has perpetuated colonial dynamics even since before the Handover. The Sino-British Joint Declaration, in a sense, is an exemplar of how inter-imperial collaboration actually blocks Hongkongers’ genuine democratic self-determination. In the following years, the CCP and its sympathizers—including much of the city’s business elites—actively lobbied the colonial regime against the expansion of democratic mechanisms, like direct elections to the Legislative Council. In other words, the change in sovereignty has caused little to no change in the city’s actual material conditions. Beijing has in fact retained much of the infrastructure, both material and ideological, of the British colonizers because they are well-suited for capitalist accumulation.

That said, it is undoubtedly apparent that the protest movement embodies its own form of colonial nostalgia. But colonialism is not a unified phenomenon that can be easily pinned on the legacy of British rule or the reality of Chinese authoritarianism. Just as the CCP builds its key instruments of oppression from an existing infrastructure of Western colonialism, protestors without state power can also appropriate the ideological frameworks of Western colonialism. Colonialism functions structurally—as a condition of a people’s material existence under forms of political and economic oppression. Colonialism can also exist as psychological vestiges, and in the form of various colonial actors taking advantage of these people’s self-determination movement as a bargaining chip against one another.

Frantz Fanon himself a psychiatrist thoroughly uncovered the ravages of colonization on the psyche that come to color—and limit—an oppressed people’s struggle for liberation. Calling for decolonization in its most authentic sense means grappling with these contradictions, and struggling alongside those oppressed and without state power toward more liberatory paths, and in solidarity with other oppressed peoples.

IZ3W: Was colonial rule all bad? After all, doesn’t the bare fact that Hongkongers nowadays can courageously fight against state repression show us the strong liberal tradition left by Britain, with all its institutions including liberal universities and a highly independent justice system?

LC:  It would be inaccurate to cite the city’s “strong liberal tradition” as the determining factor for the 2019-20 struggle. What of the thousands of strikes in China each year, most guided by grievances against local authorities rather than a wholesale resistance to China’s illiberal system? Or the countless mass uprisings from the movement for Black Lives to France’s Gilets Jaunes, whose struggles directly reveal the limits of the “liberal” tradition of their governing regimes?

Hong Kong’s liberties were won by activists over the years in struggles against colonial authorities. The limited democracy we had in the Legislative Council before last year was the result of the organizing of early pro-democracy leaders in the 80s and 90s, and other expansions of democratic rights. Governor Chris Patten’s electoral reforms in 1994 were conspicuously fragile gains (Beijing undid many of the reforms upon assuming sovereignty of Hong Kong) and are in reality, merely tactical maneuvers between colonial state elites, without buy-in from Hongkongers themselves.

If anything, we can now clearly see the limitations of Hongkongers’ general trust in the liberal tradition. The relative absence of structural critique may have catalyzed a powerful and contingent alliance in the anti-extradition bill protests, but it has also obscured effective strategies in many instances: focusing on lobbying various state elites for gestural support; damaging sanctions, or “human rights” acts has come at the expense of grassroots and civil society alliances; and a failure to consolidate around the power of workers (e.g. new unions, the general strike) as a central vector of struggle—like in Myanmar right now.

IZ3W: Awareness of the importance of decolonization and the fight against racism was raised worldwide after the brutal murder of the US citizen George Floyd by police. In the US and in Europe, activists toppled monuments and relics that commemorate (glorify) the colonial past. Conservatives accused them of violent iconoclasm. In Hong Kong, a seemingly strange case appeared during the 2006/7 protests against the demolition of Star Ferry Pier and Queen’s Pier, where “localist” activists argued for preserving iconic buildings from colonial time as a way to emancipate from colonialism. Wasn’t this simply colonial nostalgia? How can this seeming paradox be solved?

LC:  In the article “The forgotten road of progressive localism: New Preservation Movement in Hong Kong,” Yun-chung Chen and Mirana M. Szeto explore this localist preservation movement in great detail. They argue that this movement exemplified a progressive strand of localism, as preservation activists advocated anti-neoliberal values, centered the voices and experiences of marginalized communities, cultivated cross-class coalition, and advocated for decolonization of commodified public culture and discourse.

During the preservation movement of Queen’s Pier, pro-Beijing newspapers in Hong Kong were quick to denounce such activism as colonial nostalgia. However, looking beyond their names, it is important to note that the Star Ferry Pier and the Queen’s Pier did not just signify British colonialism. Rather, they were integral to Hongkongers’ collective memories of public space across generations. Situated in Central, the Queen’s Pier served as a gathering space for grassroots local and migrant workers. These two piers were also key sites of the Hong Kong labor and anti-corruption movements.

Under the banner “Farewell to the Colonial Mindset, Reclaim Our City,” the assembly organized by the activist group Local Action at Queen’ Pier drew participants who were new immigrants, grassroots advocacy groups, and Hongkongers who opposed state-led urban renewal that was most often property developers enriching “white elephant” projects.1 The concept and action of reclaiming was key here, as participants of the rally and Local Action activists made use of political and discursive agency to imbue colonial monuments with hybridized local meanings that complicated rather than cemented the colonial past.

IZ3W: The popular protest slogan 我哋真係好撚鍾意香港 (“We really fucking love Hong Kong”) highlights how important a role the sense of belonging and the Hongkonger identity played in the recent protest movements. From the early localist discourse in the 2000s to the current day, diverse narratives about what Hong Kong and Hongkonger identity have involved. Putting them into the context of the city’s colonial past, what and whom do these narratives choose to remember or to forget, and with what kind of positive or problematic implications?

LC: It is important to interrogate who is included, who is categorically excluded, and who is only selectively or tactically included as Hongkongers. For instance, during large-scale social movements, such as the Umbrella Movement and the 2019 protest, mainstream Hong Kong protesters were quick to perform acts of solidarity with ethnic minorities, even though deep-seated structural racism remained unchallenged. In this case, the inclusion of ethnic minorities as Hongkongers was only temporary, and only insofar as the inclusion served the interests of the broader movement, led by majority Han Hongkongers. In addition to ethnic minorities, mainland Chinese immigrants are often excluded from the narrative of a local Hong Kong identity.

The 2019 movement and the passage of the National Security Law have heightened skepticism among Hongkongers as they worry that they will be reported to the authorities by those around them. When such skepticism is coupled with xenophobia against mainland Chinese people, they become automatic suspects. Mainland Chinese immigrants who seek inclusion, hence, are expected by mainstream Hongkongers to repeatedly demonstrate and perform their allegiance to the Hong Kong movement or the politico-ethnic categorical construct of the “Hongkonger”.

As Chen and Szeto point out, progressive localism, in articulating a local cultural identity, could be deployed as a tactic and tool of grassroots resistance and community building. As a mobilization tool, Hong Kong identity can be used to encourage people to engage in community-based participatory projects and networks that center on building collectives from the ground up. Hong Kong identity, in other words, is not inherently tethered to nativism or other right-wing localist ideologies. Defining Hong Kong identity as categorically and necessarily anti-China is limiting because it re-centers the CCP Party-State as the arbiter of Chineseness, as a fixed category that they alone can commodify and deploy. These assumptions foreclose the deliberative space for Hongkongers from different positionalities to grapple with the different connotations and tensions of identity itself.

IZ3W: Left and internationalist voices were very much marginalized in recent movements which claimed to be leaderless and non-ideological. Progressive positions are often accused of unrealistic idealism and intellectual aloofness. How would Lausan react to such criticism and what is its strategy of activism for the future especially considering the pressure under the National Security Law (NSL)?

LC:  In a city in which the oppressors have long monopolized “left” discourse, it is always going to be an uphill battle for the democratically-minded left to gain traction, especially since such traditions have been thoroughly sidelined and marginalized by the UK and the CCP. Liberals had been easily co-opted or neutralized by each sovereign, just as right-wing nativists often directly gave ample ammunition for the CCP to smear the movement as wholly exclusionary and foreign-backed, alienating us from countless allies under the banner of “Hong Kong First.”

It was no different in Hong Kong: As academic and pro-democracy politician Helena Wong Pik-wan documented, radical leftists in Hong Kong were some of the first to sound the alarm to resist the CCP and support its dissidents since the late 70s, long before anyone else cared. Leftists from April Fifth Action were beaten and charged for protesting Xinhua News Agency’s celebration in September 1989—as liberal-centrist pro-democracy leaders like Martin Lee stood squarely on the side of the police. And today, many of our leftist allies have been on the frontlines of the anti-extradition bill protests. Where is the idealism and aloofness here?

Perhaps the more pertinent question is “What is the price of the uncritical ‘pragmatism’ that has always characterized Hong Kong’s opposition camp, from the early pro-democracy liberals’ compromises with colonial officials to contemporary localists’ refusal to think critically about who we include as allies in our ranks in the name of ‘unity’?”  Have these methods worked against Beijing, and have Hongkongers genuinely considered what left-wing perspectives have to offer in practice?

While some left discourses can tend toward abstraction, many advance precise, concrete solutions. Advocating for solidarity with mainland Chinese and other ethnic minorities is no idealism: We need all the allies we can get in a mass movement against authoritarianism. There is actually no choice going forward but to do the difficult work of reaching across the border—both politically and culturally—to build the networks that can in the future ensure mutual freedom from repression. Talking about labor power is no distraction from the struggle against the CCP: Studies show that organizing a mass movement on the basis of the working-class has long been a particularly effective strategy to win democratic rights. One effective mode through which the CCP maintains its hegemony is precisely through its control over Hong Kong’s neoliberal system, in partnership with local and mainland capitalists.

In terms of the future, we must continue to support the new unions—one of the few remaining concrete lines of struggle left after the NSL2—along with other grassroots struggles locally and in the mainland. With an ever-increasing diaspora especially in the wake of the NSL, there is a greater need to organize them in support of immediate campaigns against the CCP’s reach, and also to plant seeds—connecting them with other mass movements and traditions as invaluable political education, in preparation for Hong Kong’s future struggles.

11 articles on revolution in the words of Hongkongers themselves