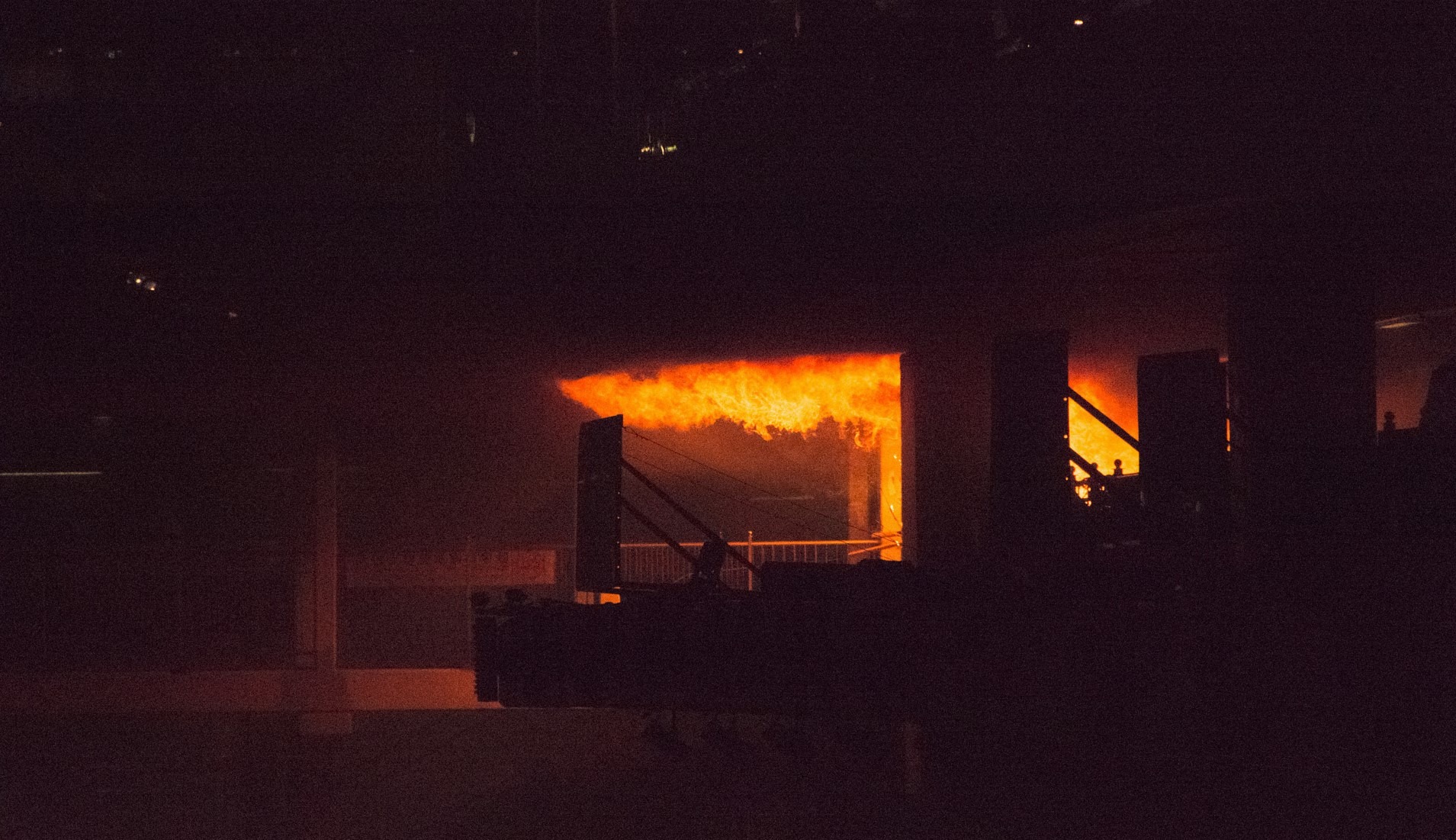 A footbridge leading in to Polytechnic University in flames during the siege of PolyU. 16 November, 2019. Photo: Alex Yun for Lausan.

The Basic Law was never designed to stand up to Beijing.

Read the article in Chinese (Simplified and Traditional) and Korean.

Beijing plans to impose new national security laws in Hong Kong that many have said signify the end of Hong Kong’s “One Country, Two Systems” framework. Others have called it a complete breach of the city’s autonomy by the People’s Republic of China. In this piece, we hope to shed some light on the new law, some of the legal nuances, and what it means for the future of Hong Kong.

What are the new national security laws? And why are they so controversial?

Beijing plans to impose a new set of national security laws, which include introducing criminal offenses for acts such as secession, subversion, foreign interference, and terrorism.

This effectively bans a broad spectrum of political activity, which would include much of what we’ve seen from the Hong Kong movement thus far. The enforcement of sedition and subversion laws diminishes Hongkongers’ right to free speech and press freedom. Any relationships with foreign political organizations could be categorized as foreign interference. Clashing with the police, even in self-defense against their unaccountable violence, could be labeled as terrorist activity.

However, national security clauses aren’t new to Hong Kong. Many of them are found in Article 23 of Hong Kong’s Basic Law, the city’s mini-constitution, but efforts to pass these laws were ultimately scrapped after half a million people protested its passage in 2003. So what’s different this time? Why has this news caused such an uproar? Why has the pro-democracy lawmaker Dennis Kwok called it “the most devastating thing to happen to Hong Kong since the Handover”?

After this past year of protests, Beijing has arrived at the conclusion that the Hong Kong government (and its Legislative Council) can no longer be trusted with the passing and enforcement of national security laws.

What is the NPCSC? What is their role in the Hong Kong political and legal system?

The National People’s Congress Standing Committee (NPCSC) is the highest organ of state power of the People’s Republic of China, and is dominated by members of the Chinese Communist Party. We can think of it as having both powers of a legislature as well as a final constitutional court in the case of Hong Kong; it has the power to draft certain laws and interpret the Hong Kong constitution to decide on whether those laws are legal.

Unlike Hong Kong’s Legislative Council (LegCo), which would struggle to enact the national security laws owing to a tense political climate and pan-democratic resistance, the NPCSC—dominated by CCP members—is expected to swiftly draft and approve these new national security laws for Hong Kong. This means that Beijing would be able to bypass any local Hong Kong resistance that would otherwise be involved in this process.

But can Beijing directly pass laws for Hong Kong?

Not usually. However, the NPCSC has a secret weapon: Article 18 of Hong Kong’s Basic Law. This article allows the PRC to directly apply laws in Hong Kong—but there’s a caveat. The Article only allows certain PRC laws to qualify: laws relating to defense, foreign affairs, or “other matters outside the limits of the autonomy” of Hong Kong.

The legal question is whether this slate of national security laws can be satisfyingly categorized into any of these three areas. Luckily, laws such as succession, subversion, and even terrorism are generally not recognized as matters of defense or foreign affairs (instead, they fall under a different category called public order laws). Furthermore, Article 23 states that national security laws are included under the purview of the Hong Kong government, and thus do not qualify as “other matters outside the limits of [Hong Kong’s] autonomy.”

Therefore, the legality of Beijing passing these national security laws under Article 18 is suspect. However, that will not stop the NPCSC from passing the laws anyway.

Can these laws be legally challenged in Hong Kong?

Yes, the laws can be challenged in Hong Kong courts to contest their legality. Specifically, they may be challenged on whether they exceed the power granted to them by Hong Kong’s Basic Law. There is good reason to believe that such a challenge may even succeed. However, under Article 158, the NPCSC holds final power to interpret the law as they wish, so they can always overrule the court’s decision.

The fact that the NPCSC holds the final power to interpret the Basic Law downgrades all constitutional guarantees of Hong Kong’s Basic Law “to mere promises the delivery of which is at the grace of the Chinese Communist Party.” In other words, Hong Kong never really had true constitutional rule of law and its very legal order has always been subordinate to Beijing’s political whims.

So in essence, the laws could be challenged. But the NPCSC would be able to overrule any unfavorable court decision by issuing its own final interpretation under Article 158, which it almost certainly will do since it is the same body that will write and enact the law.

What else do we need to be concerned about?

The details of this arrangement have yet to be released, but the move falls in line with Beijing’s increasing boldness in bypassing Hong Kong institutions entirely to exert more direct control.

What does this mean for the future of Hong Kong?

With the passing of these laws, both protesting en masse and individual actions of political resistance will be met with much harsher consequences. Any political activity deemed seditious or unfavorable to the central government will be much riskier for Hong Kong activists to engage in. Hongkongers are already flocking to install VPNs to protect their identities online.

But the consequences go far beyond just the substance of the national security laws. This is not 2003 all over again. The combination of Beijing’s power to directly enact laws for Hong Kong and interpret those laws as widely as they wish spells the death of the “One Country, Two Systems” principle, and any semblance of political and legal autonomy that the region still enjoys.

‘At the precipice of death, we struggle for breath’: New avenues of resistance

If last year’s extradition bill was a legal portal that had sent individuals to the Mainland to bypass Hong Kong’s rule of law, judicial independence, and due process, then these new national security laws are a legal portal that sends legislation from Beijing directly to Hong Kong by fiat. In other words, instead of extraditing Hongkongers to the Mainland to face trial, Beijing’s legal system will simply be brought to Hong Kong.

But if we’ve learned anything from Hong Kong’s long history of movement building, it’s that we can expect Hongkongers to continue resisting.

The game has changed and so must the Hong Kong movement. With the fate of Hongkongers now more intimately tied with those who are marginalized and oppressed in the Mainland, Hongkongers must realign their struggles with Chinese Mainlanders who are similarly oppressed by the Chinese state.

Now is not the time to look to the West. Now is the time for solidarity with Chinese workers, Chinese activists, and all who are oppressed in China.