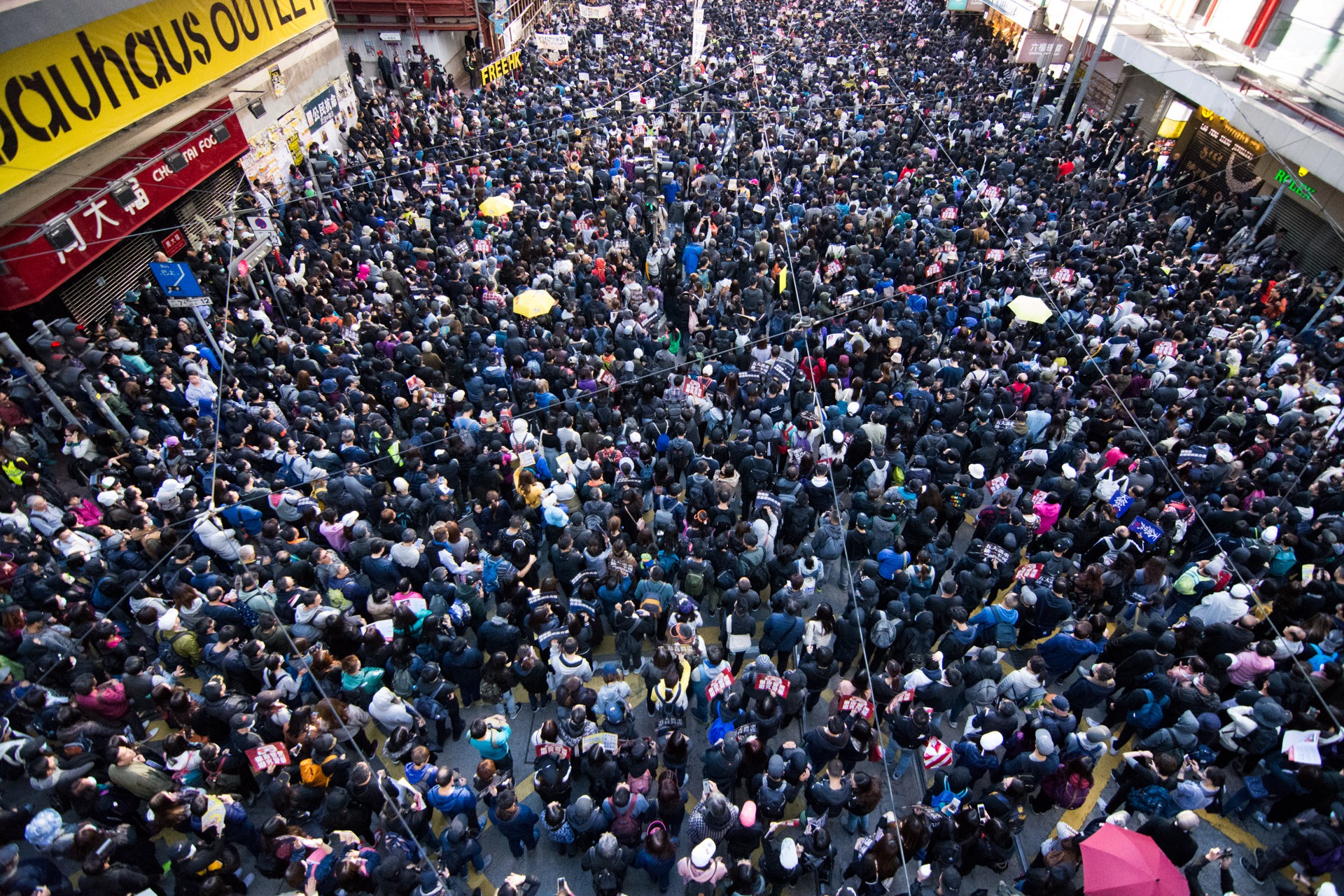 Thousands of pro-democracy protesters march in Causeway Bay, 8 December 2019. Organizers estimated the crowd to number as many as 800,000. Photo: Alex Yun for Lausan

For Hong Kong, Beijing’s so-called ‘anti-imperialism’ is a sham

Structures of inequality do not simply wither away with the hoisting of a new flag.

The author is a former member of Left 21, a Hong Kong socialist collective.

Since the beginning of the anti-extradition movement in Hong Kong, which has now evolved into a broader struggle for democracy and against police brutality, Beijing has repeatedly rebuffed foreign criticism of Hong Kong authorities’ handling of the political crisis. In response to criticism from then-British Foreign Secretary Jeremy Hunt, for example, a Chinese government spokesperson issued an immediate and harsh rebuke: that Hunt was “fantasizing in the faded glory of British colonialism.” More recently, as Hong Kong activists met with members of the U.S. Congress to rally support for the Hong Kong Human Rights and Democracy Act—which enables the U.S. government to sanction officials responsible for the erosion of the city’s guaranteed autonomy under “One Country, Two Systems”—the Chinese Foreign Ministry spokesperson Geng Shaung reacted angrily and demanded that the U.S. “respect China’s sovereignty.”

Time and again, Beijing has made the argument that, since 1997, it has liberated Hong Kong from the yoke of European colonialism and continues to keep the West’s imperialistic foreign influence at bay. This is part of the Chinese Communist Party’s broader narrative, in which they have portrayed themselves as the anti-imperialist revolutionary agents that re-built China from its “Hundred Years of Humiliation,” a long century of invasions and unequal treaties starting from when the first European gunboat docked at Chinese shores.

This history of Western imperialism is, to a large extent, true. The harm done by European colonialism—of which systematic exploitation and racial inequality were integral features—is not to be taken lightly, and certainly nothing to be nostalgic about. Moreover, Western capitalist powers like the United States have repeatedly exercised their political and economic influence to further their own agendas across the world, often at the expense of the very values protestors in Hong Kong are fighting for. Wholehearted trust in help from these corridors of power seems naïve at best, and at worst a betrayal of the movement’s demand for self-determination.

Yet if we—especially those on the left—buy into the narrative that Beijing tells about its “anti-imperialism” today, we would be, as former PRC President Jiang Zemin once berated Hong Kong, “too simple, sometimes naïve.”

The fact is: for Hong Kongers, Beijing’s contemporary version of anti-imperialism is a gross distortion and betrayal of the core principles of anti-colonialism, a body of political thought that grew out of the revolutionary movements of the 20th century.

A central belief, shared by many Asian and African anti-imperial leaders and thinkers, is that a change in the identity of the ruling class and the formal recognition of states’ borders were only small steps towards achieving decolonization. Decolonization was more than a movement for national independence; it was about enacting an egalitarian revolution.

Anti-colonialists saw that colonialism was not only foreign domination, but crucially also a system of governance in which political rights, economic resources, and social status were distributed unequally within the colonial society, and between the colony and metropole. In the prominent postcolonial theorist Partha Chatterjee’s words, colonial governance followed “the rule of colonial difference.” Colonialism divided people along racial, religious, ethnic, linguistic, and other forms of difference, and distributed rights and privileges along that difference. The result is that colonies were rife with deep social divisions and hierarchies, making it easier and more manageable for a European minority to rule over large populations.

Amílcar Cabral, one of Africa’s foremost anti-colonial leaders, was the founder and leader of the African Party for the Independence and Unity of Guinea-Bissau and Cape Verde (PAIGC). He led a 17-year long armed struggle against Portuguese colonialists (and had read and admired the writings of China’s own anti-colonial thinker, Mao Zedong). He describes inequality under colonialism as a “pyramid.”

At the “summit” of the pyramid, Cabral argues, is the ruling class, which includes both the foreign and local rulers. “The colonizer installs chiefs who support him, and who are to some degree accepted by the masses; he gives these chiefs material privileges .… Above all, by means of the repressive organs of colonial administration, he guarantees economic and social privileges to the ruling class in their relations with the masses.”

Next on the pyramid is the “indigenous petite bourgeoisie,” which “stands midway between the masses of the working class … and the small number of local representatives of the foreign ruling class.” This indigenous middle class comprises of professionals, civil servants, businesspeople, landowners, and so on, and most of them “aspire to a way of life which is similar if not identical with that of the foreign minority.” They indirectly or directly help colonizers control the masses, and benefit from colonialism.

Lastly, the working class, or the rural and urban masses, is at the base of the pyramid, to be exploited, repressed, and completely marginalized.

These political and economic structures of inequality do not simply wither away with the hoisting of a new flag. Rather, without comprehensive reforms to the political and economic institutions of the post-colony, inequality remains deeply entrenched. Whereas colonizers formerly occupied positions of power and privilege, the same positions are now occupied by local capitalists and the ruling elite.

The politics of inequality

Under Beijing’s rule, ordinary citizens are given meager say in Hong Kong’s undemocratic political system. Instead, a small committee dominated by Beijing-friendly business interests selects the Chief Executive. The Legislative Council’s so-called “functional constituencies,” a system created by the British allowing the city’s business sectors to elect their own legislators, all but ensure the dominance of establishment politicians over representatives from the opposition, who are favored by Hong Kong citizens.

Without universal suffrage, Hong Kong people lack the power to hold their rulers accountable. Instead, Hong Kong tops measurements of crony capitalism, a form of collusion in which the state gives economic benefits to business interests in return for political support. This ensures China-backed capitalists and corporations, not the general population, make Hong Kong’s policy’s choices: low income taxes and non-existent capital gains taxes, meager spending on social welfare, a lack of basic labor rights such as collective bargaining, a persistent shortage of affordable housing, and so on. As a result, Hong Kong has the developed world’s largest gap between rich and poor: with a Gini coefficient of 0.539 in 2018, Hong Kong’s economic inequality is only second to New York among the world’s cities. A report in 2017 found that the city’s richest 10 percent earns about 44 times what the poorest family makes. Among the many protest graffiti photographed by the media in the past few months, one particularly strikes at the heart of the matter: scrawled along a main highway, the graffiti reads, “7k for a house like a cell and you really think we out here [are] scared of jail?”

Toward a genuine decolonization

Anti-colonial thinkers saw that in order to tie governance to the interests of the masses, political equality in the form of democracy is a basic and essential requirement of a decolonized political system. Léopold Senghor, anti-colonial activist and first President of Senegal, stressed the importance of democratization in the country’s postcolonial era. Reflecting in 1960 on the country’s independence from France, Senghor argues that, “Upon reflection, even independence is not, of itself, political independence. At any rate, not for the people …. Sovereignty, restored to the Senegalese people, had to be exercised by this people and for this people.” Today, Senegal is one of the most stable democracies on the African continent.

To achieve genuine and full decolonization, anti-colonial thinkers saw it as crucial to address colonial-era economic exploitation by redistributing wealth and the means of production. Land reform, for example, was an important part of many 20th century anti-colonial programs. Without political and economic egalitarian reforms, the freedom won by anti-colonial struggles would only be as empty as the freedom to wave a different flag.

No wonder symbols of Chinese national pride have become, for many people in Hong Kong, symbols of oppression rather than emancipation.

It is, of course, much easier for the Chinese government (and its Hong Kong lackeys) today to pretend that anti-imperialism is only about keeping out all forms of external influence. It allows the government to dismiss any Chinese and Hong Kong persons promoting progressive change, by smearing them as foreign agents. Indeed, rather than engaging with these popular demands for egalitarian reform, Beijing has chosen to hail the PRC flag–waving, national anthem–singing crowds as the “true patriots”, while ignoring the festering injustices that pro-democracy protesters seek to address.

No wonder symbols of Chinese national pride have become, for many people in Hong Kong, symbols of oppression rather than emancipation. Hence, on July 1 of this year—the same day Chinese officials and Hong Kong’s elite drank champagne to celebrate the anniversary of the city’s handover in 1997 from rule by the United Kingdom to rule by the People’s Republic of China—protestors in Hong Kong stormed the Legislative Council and defaced the emblem of Hong Kong. On October 1, the 70th anniversary of the founding of the PRC, protestors in Hong Kong burned the national flag and demanded the end of one-party rule. (The bloody day, filled with clashes between citizens and the police, ended with a secondary school student being shot.)

In fact, Frantz Fanon, the French West Indian anti-colonial writer and revolutionary, foresaw this in 1963. “Nationalism,” he writes in The Wretched of the Earth, “is not a program … [A] government needs a program if it really wants to liberate the people politically and socially. Not only an economic program but also a policy on the distribution of wealth and social relations.” Without such a program, “nationalism … leads to a dead end …. It is then that flags and government buildings cease to be the symbols of the nation.”

Here, Fanon warns that postcolonial rule grounded on a superficial nationalism that does not address structural inequality will ultimately fail. Citizens of such a postcolonial regime will come to see the regime as alienating as foreign rule.

Anti-imperialism and anti-colonialism in their truest sense requires radical egalitarian reforms at all levels of society: political, economic, and social. Yet, in its bid to stifle dissent and remain in power at all costs, the Chinese Communist Party today has abandoned a core insight of the anti-colonial tradition: that a liberated people consists not of detached elite leaders and their disempowered subjects, but, as Fanon writes, “the enlightened and coherent praxis of the men and women.”